Mick Mackie is coming to Glide in New Jersey

In just about two weeks Mick Mackie will be at the Heavens (Glide Surf Co.'s glass shop) in New Jersey making a hand full of side cut fish and flex tail fish. Mackie shapes out of Australia and is known for his innovations within the fish strain of surfboards that have come from his experiments with Winterstick swallowtail snowboards. Read this short interview that he did with Andrew Kidman for more info. Also here is a more recent interview with Mackie on Black Gold.

I have my deposit in for a side cut flex tail keel fish. I'm excited to have to opportunity to get one and can't wait to ride it when the points are doing their thing. 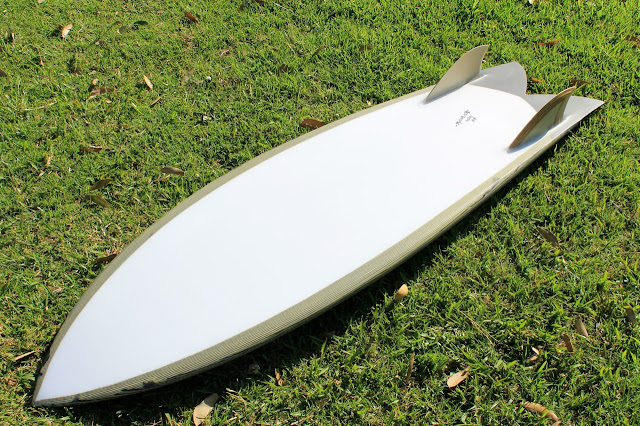 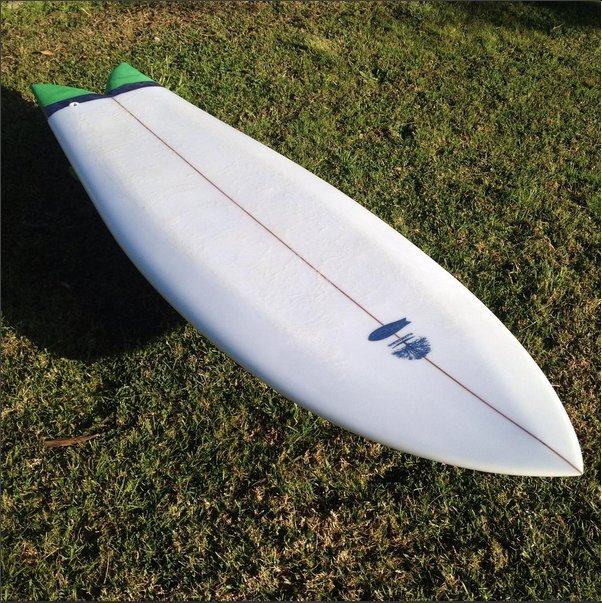 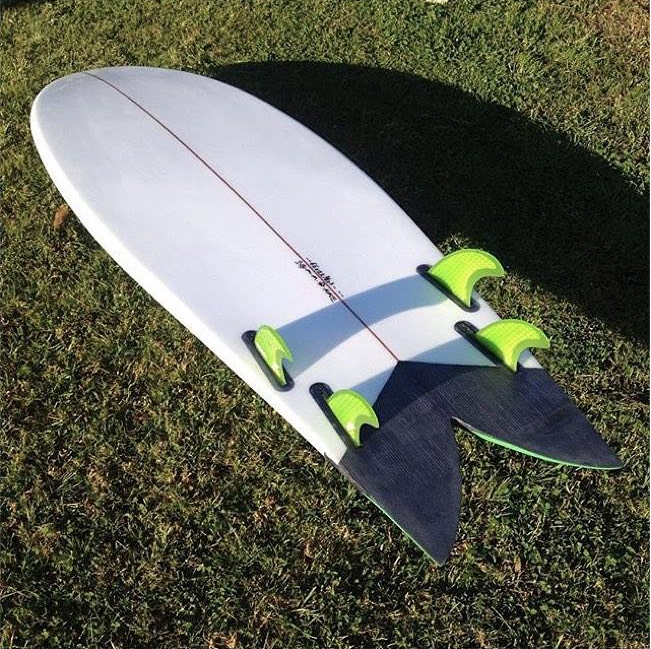 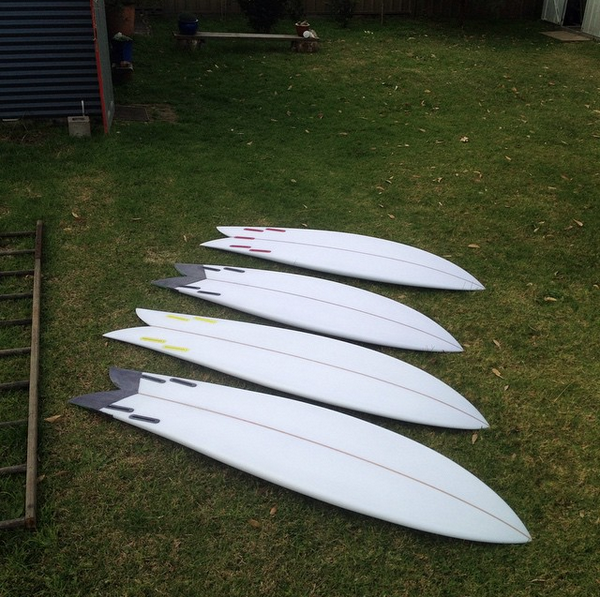 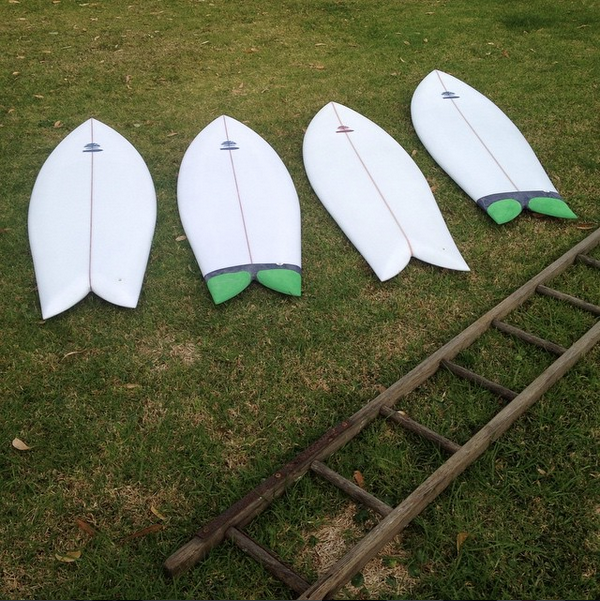 at 12:08 PM
Email ThisBlogThis!Share to TwitterShare to FacebookShare to Pinterest
10 comments

Over the weekend I attended the NY Fish Fry with other Apes Justin and Freaky Born Wings. Fun small waves were on tap and fun was had by all. I planned to document the event more thoroughly but ended up surfing the whole time. Here are some shots I was able to get before packing it in and heading back to RI. 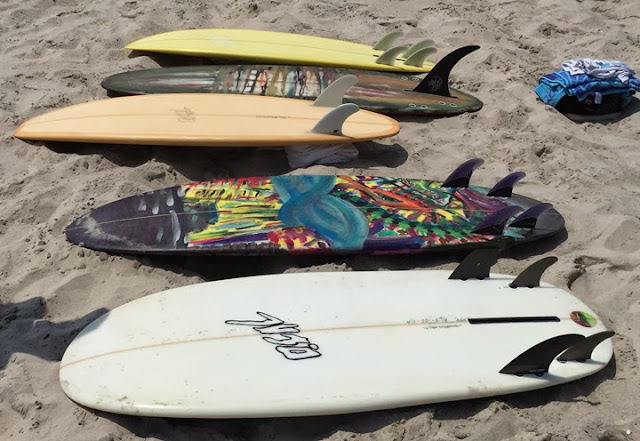 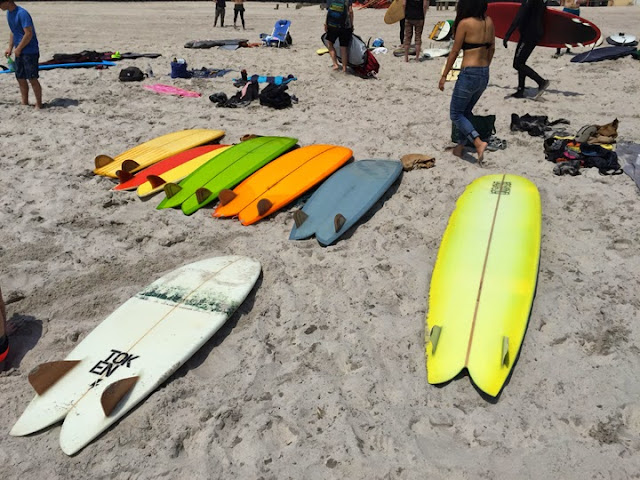 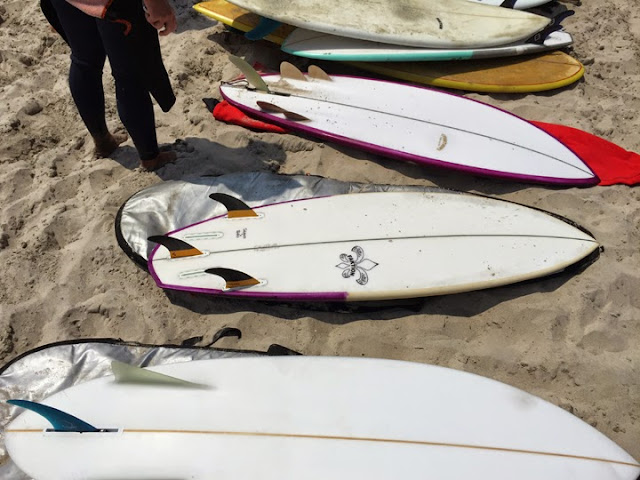 Long Island's Mark Patrocelli of Faktion surfboards always representing and the fry. I wish I would have taken an bronzer for a spin. Mark was slaying it out in the lineup.

It was all about the long fish at this fry. Here is Tyler's Josh Hall long keel fish. 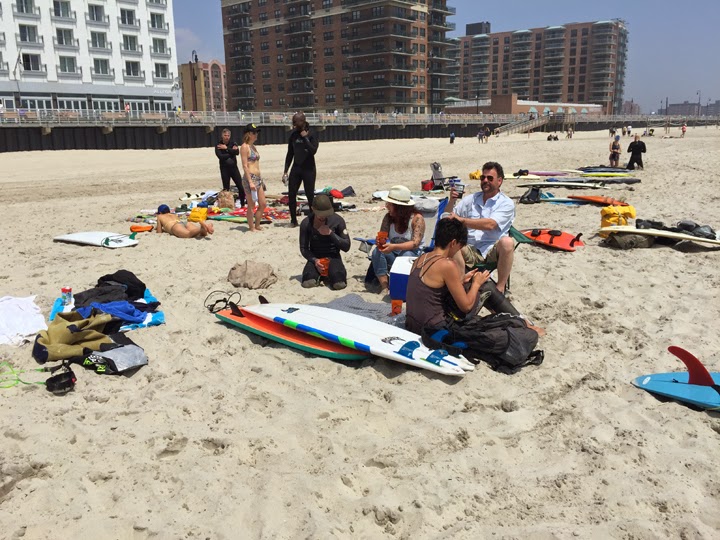 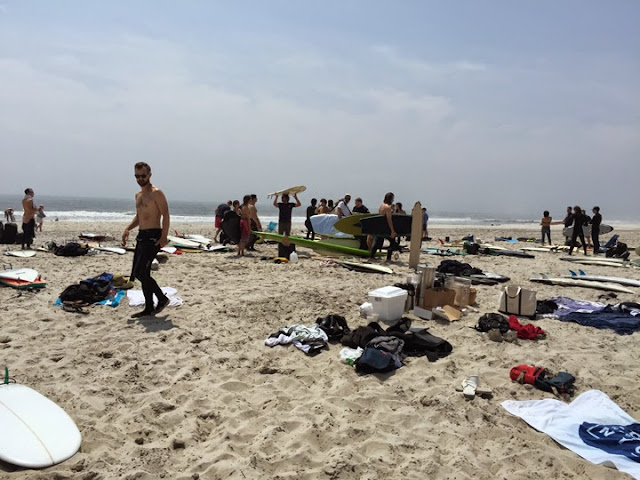 The sun eventually came out. Some were seeking shade. 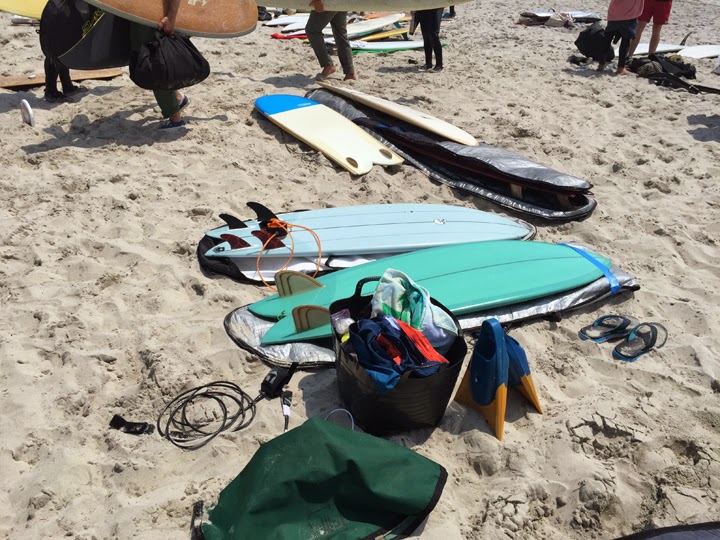 Fish quiver and a couple of Blue Gull by Wegener surfboards. 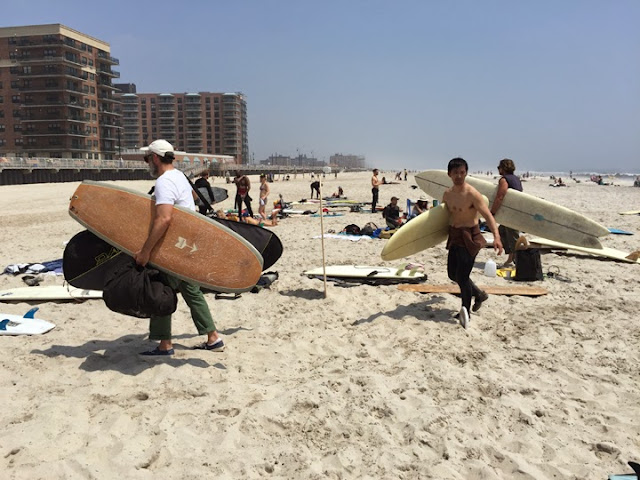 So many boards and so little time. Until next year. 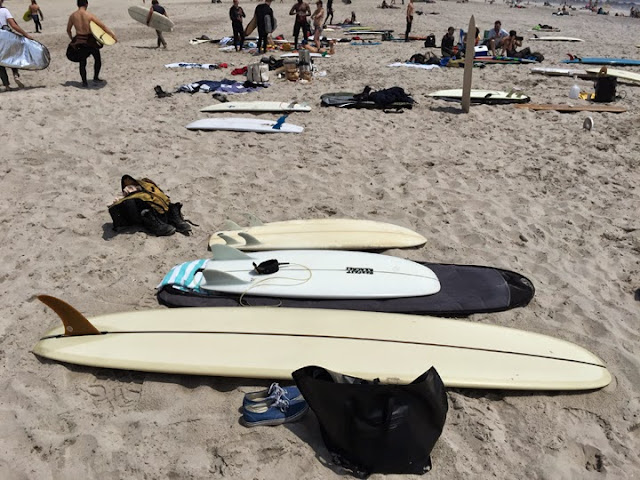 Wish I could have given that Pizza box a ride by Deepest Reaches. 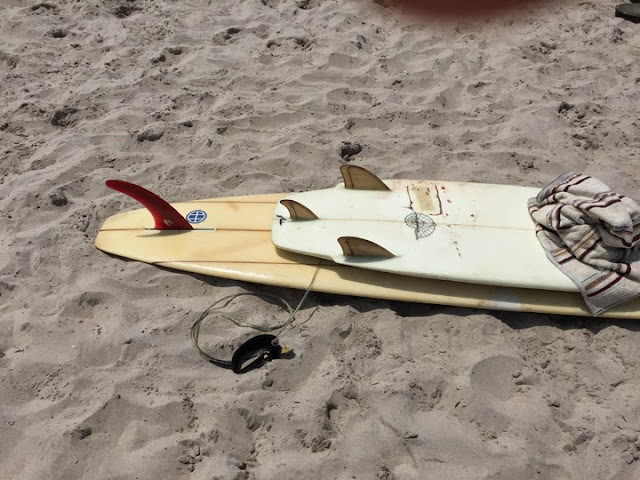 Big fan of the Simster by Hydrodynamica. After battling the traffic in NY and CT I finally made it home to RI. Here is my fish quiver drying in the back yard. Top to bottom: 9'11 Deepest Reaches MEGAfish, 5'10 Kookbox fish, 5'10 Josh Hall J Hall fish.
at 11:21 AM
Email ThisBlogThis!Share to TwitterShare to FacebookShare to Pinterest
7 comments

A terrific read, packed with stories and some good shop talk...would this be out of place in Surfer's Journal?  Props to Joe, one of the guys who deserves much of the blame for keeping things interesting around these parts. 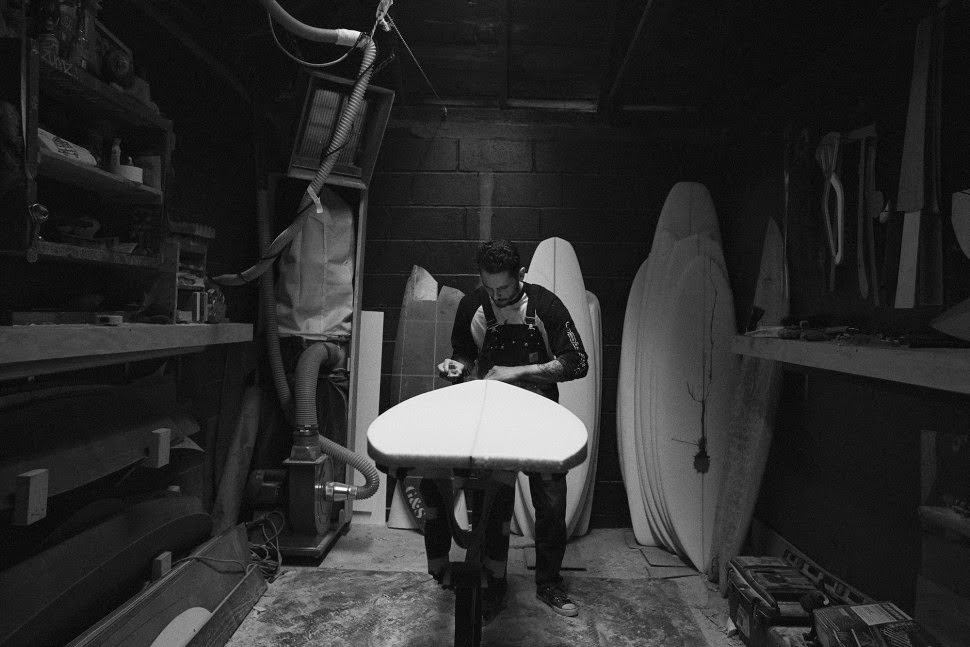 yeah I know, old news if you're a ravenous blogosphere hound, whaddya want, I was working 2 weeks without a day off.
at 2:59 PM
Email ThisBlogThis!Share to TwitterShare to FacebookShare to Pinterest
3 comments

Our Friends at EAST Surf Co. put together this nice little edit with Banjo McLachlan on a swell August day in RI. Click through the link above to see photos as well.


August, Rhode Island from EAST Surf Co. on Vimeo.
at 4:46 PM
Email ThisBlogThis!Share to TwitterShare to FacebookShare to Pinterest
3 comments

I took the family to the Water Bros 4th Annual Surf Fest over the weekend. Good times were had by all. It was cool to see so many classic boards and chat with other surfers. I recently moved to South County Rhode Island and will be posting on events and happenings from a New England perspective. Justin and Freaky Born Wings will hold it down on all things NYC. Enjoy the pics!

Providence's own Spirare Surfboards. Kevin has a full lineup of EPS core wood boards along with PU boards. I was checking out the quad pictured on the table above.

Stoked to run into an Aquatic Apes favorite, Mike from Grain Surfboards. They made the trip down from Main to show off some new goodies. The keel fish had my attention along with their new Pig model. Mike also informs me that they recently developed a killer noserider. Be on the lookout for that!

If you're in New England than you need to know about Vec Surfboards. I spent quite a bit of time talking with Shaw about his finless design and longboards. At some point in the near future I'm going to demo that finless board!

Hanging out with Matthew and Joanna of East Surf Co. was a total bright spot at the event. I originally met them at the first Brooklyn Surf Flea then out in the lineup at Rockaway. I have come to be a real fan of their wax and use it exclusively whenever I can. At the surf fest they were featuring their new Wax Tool hand cut out of American Walnut. Yeah they are sweet functional objects so I showed some love and pick one up.

I saw a few short and fat old vee bottoms that look like they would be a blast to surf. See them got the gears turning on a future custom form a yet to be determined shaper.

at 12:35 AM
Email ThisBlogThis!Share to TwitterShare to FacebookShare to Pinterest
1 comments

Fun waves and happy times.  Big ups to Chris, Tyler, Toddy, and everyone who brought boards, stoke, and other stuff to share.  BEST THING EVER.

NYFishFry2014 B from Works On Digital Paper on Vimeo.
at 10:49 AM
Email ThisBlogThis!Share to TwitterShare to FacebookShare to Pinterest
0 comments

It Doesn't Not Work: Outer Limits of Pure Surf Design

What an inspired idea.  I can't wait for this.  And I've got a submission!  I hope this brings some new folks out of the shadows...maybe YOU?

at 9:39 PM
Email ThisBlogThis!Share to TwitterShare to FacebookShare to Pinterest
0 comments

We owe our name to Elaine Morgan's lecture on evolution. It fits our unreasonably primitive instinctive desire to dunk our sorrows and lift our spirits in the briney blue.
You can join in on the conversation at our facebook group.